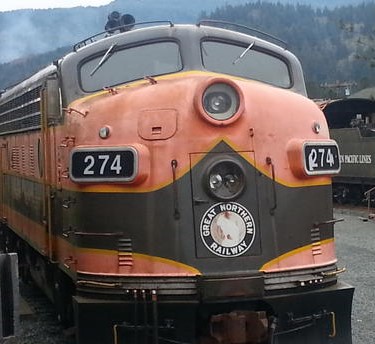 it is like the rest except there are more trees 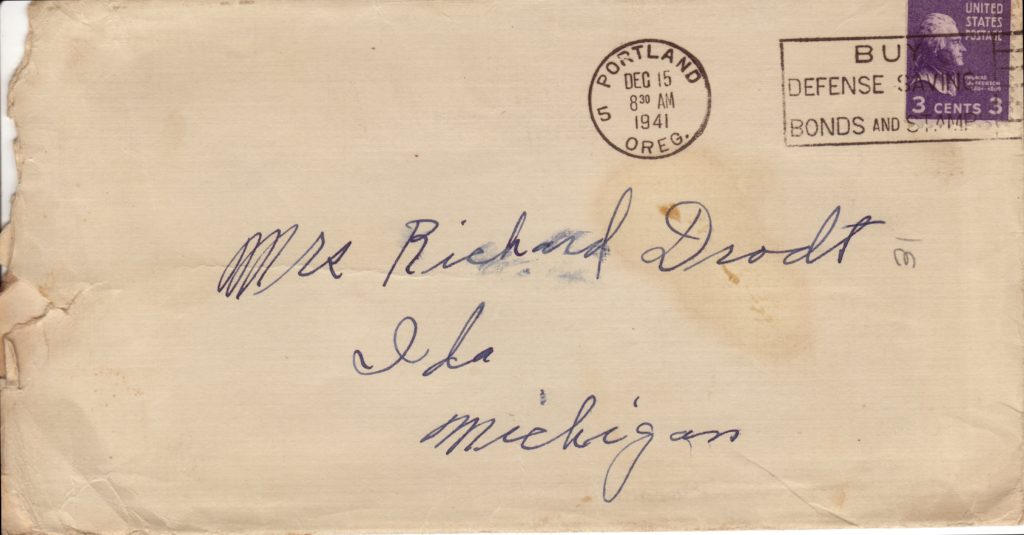 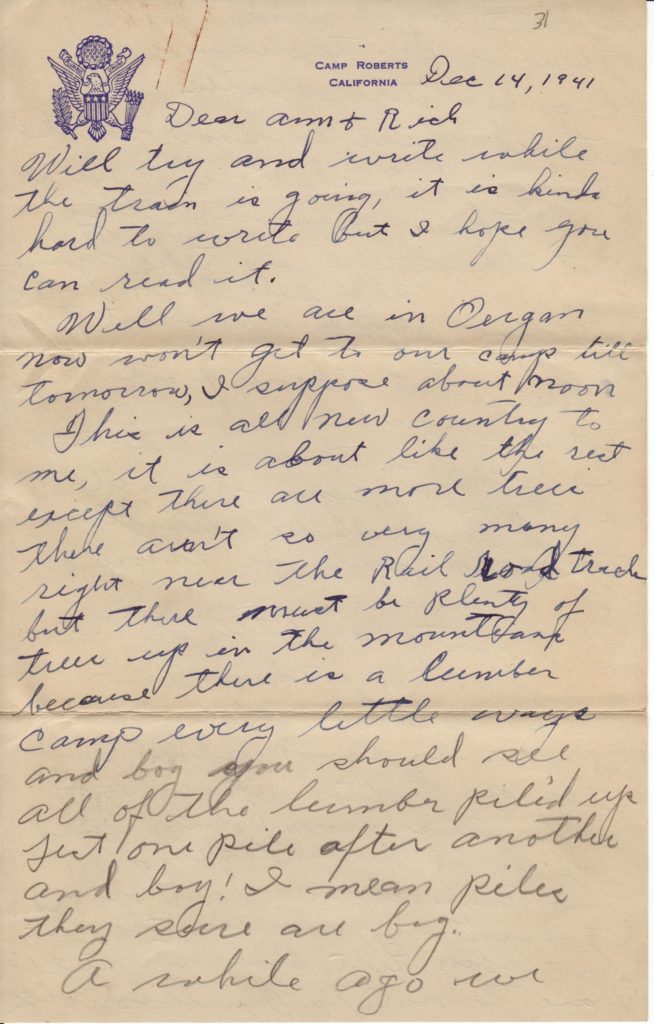 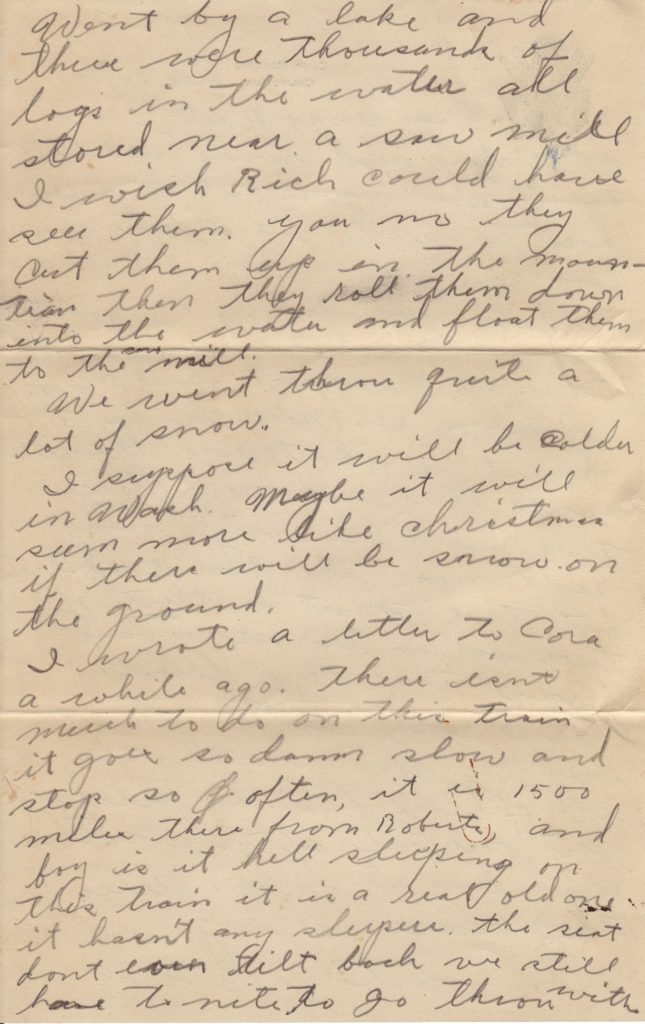 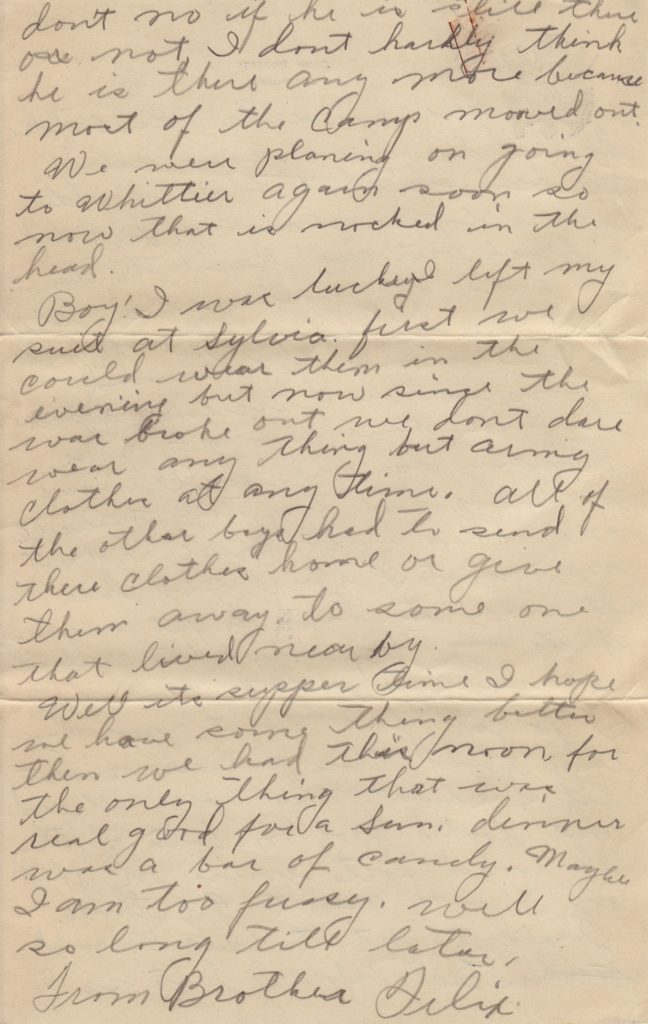 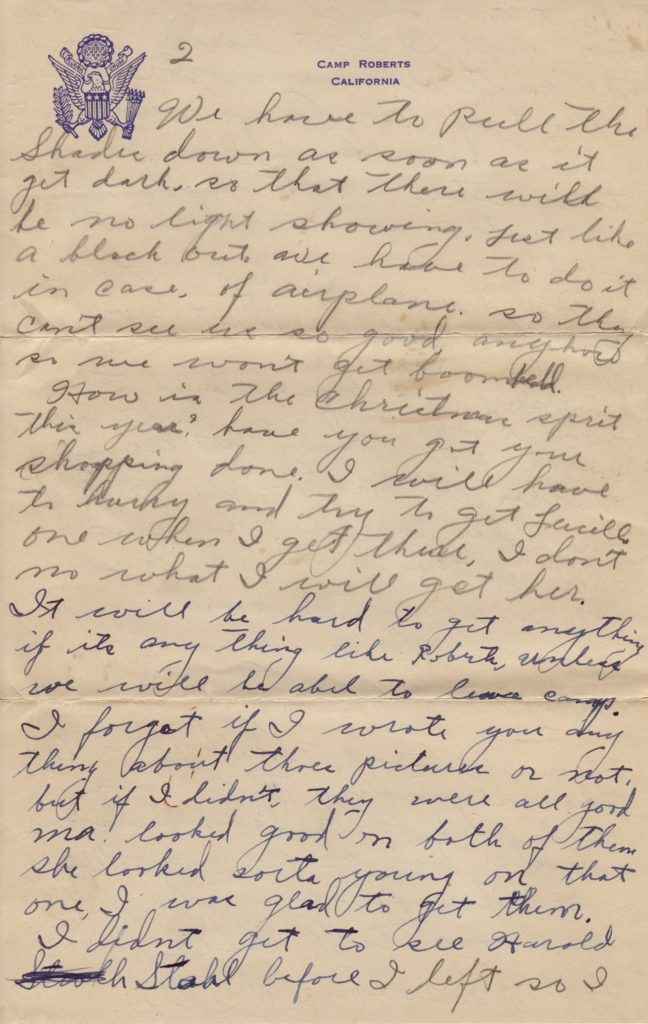 Dear Ann and Rich,
Will try and write while the train is going, it is kinda hard to write But I hope you can read it.

Well we are in Oregon now won’t get to our camp till tomorrow, I suppose about noon This is all new country to  me,  it is like the rest except there are more trees. There aren’t so very many  right near the Rail road tracks
but there must be plenty of trees up in the mountains because there is a lumber camp every little ways and boy you should see all of the lumber piled up Just one pile after another and boy! I mean piles. They sure are big.

A while ago went by a lake and there were thousands of logs in the water all
stored near a saw mill I wish Rich could have seen them. You no they
cut them up in the mountains then they roll them down into the water and float them to the mill. We went through quite a lot of snow.

I suppose it will be colder in Wash. Maybe it will seem more like Christmas if there will be snow on the ground

I wrote a letter to Cora a while ago.

There isn’t much to do on this train it goes so damn slow and stops so often, it is 1500 miles there from Roberts, and boy is it hell sleeping on  this train it is a real old one it hasn’t any sleepers the seat don’t even tilt back we still
have tonite to go through with.

We have to pull the Shades down as soon as it gets dark. so that there will be no light showing. Just like a black out we have to do it in case of airplane. so they  can’t see us so good anyhow so we won’t get bombed.

How is the Christmas spirit this year? Have you got your shopping done. I will have to hurry and try to get Lucille one when I get there, I don’t no what I will get her. It will be hard to get anything if its any thing like Roberts, unless we will be able to leave camp.

I forgot if I wrote you anything about those pictures or not,  but if I didn’t, there were all good Ma looked good on both of them she looked sorta young on that one, I was glad to get them.

I didn’t get to see Harold Stahl before I left so I don’t no if he is still there
or not. I don’t hardly think he is there nay more because most of the camp moved out. We were planning on going to  Whittier again soon so now that is socked in the head.

Boy! I was lucky I left my suit at Sylvia’s. First we  could wear them in the
evening but now since the war broke out we don’t dare wear anything but army clothes at any time. All of  the other boys had to send there clothes home or give them away to some one that lived near-by.

Well, its supper time I hope we have something better then we had this noon. for they only thing that was real good for a Sun dinner was a bar of candy.

Maybe I am too fussy. Well so long till later,
From Brother Felix