I am 5th class Technician 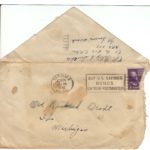 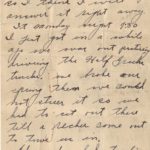 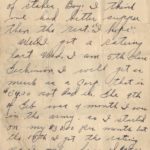 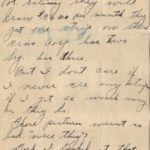 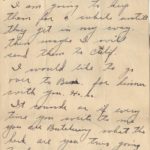 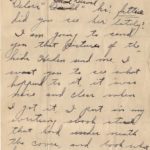 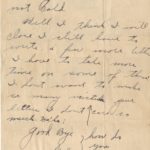 Dear Ann,
Received your letter today so I think I will answer it right away. It Monday night 7:30 I just got in a while ago we was out practicing driving the Half Tracks Trucks. we broke our spring then we could not steer it so we had to sit out there till a recker come out to towe us in.

The cooks had to fix us a little supper they didn’t no we was out there. They had already throw everything away. They fixed us couple of stakes. Boy, I think we had better supper than the rest. “I hope.”

Those pictures weren’t so bad “were they?” Gosh I looked at that one of me, and by gosh I thought for a minute it was Ben Ha Ha  I guess it was the hat. Ben always wear his just like I had mine on. I am going to keep them for a while until they get in my way. then maybe I will send them to Calif.

I would like to go over Ben’s for dinner with you. Ha. Ha.
It sounds as if every time you write to me you are Butchering what the heck are you two doing to do with all the meat.
We have a radio here its playing “Some one is rocking my dream boat.” I like it. “Do You?”

Buck Ulmer. “Dec” is Delora” Duceval”  did you see her lately?
I am going to send you that picture of the kids Helen send me. I want you to see what happened to it, it was nice and clear when I got it I put in my writing book stuck that card underneath the cover, and look what happens next time I looked at it. Show it to Helen and Ben.

The weather was nice for a week now its raining out but its not cold.
Well I think I will close I still have to write a few more letters.
I have to take more time on some of them. I don’t want to make so many mistackes (How do you spell it?) your letters I don’t care so much. Ha! Ha!
Good Bye Felix.