Makes us so mad pay tax and in the army. 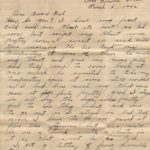 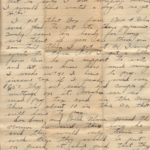 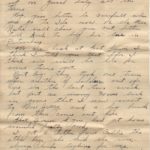 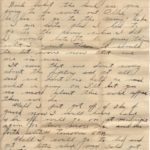 I have my first cold and sore throat, tis not so bad now last night my throat was pretty sore. I went on sick call this morning the Dr. took my temperature it was ok then he swabs my throughout and gave me some pills and told me to come back at one o’clock be wanted to take my temperature again. it was still normal so I had him swab my throat again now it feels pretty good. I stayed in all day the Srgs were pretty good to me they didn’t ask me to go out so I stayed in bed till noon. I have to go on guard at five this afternoon. but we will be in a truck with a heater in it so that won’t be so bad.

I got a letter from Lucille today and one from Lee Lowe. Lucille send me that letter you send her you told her that you got a nice letter form me so that made me feel good so that is why I am writing. Otherwise I would have waited a day or so yet. Ha! Ha!

I got that Box from Ben and Helen was glad to get it. Those peppermint candy come in handy for my sore throat. if you see them you can tell them I got it OK. I won’t write to them till I get a letter from Ben he is suppost to write and let me know how much money I made in 1941. I have to pay income tax if I made much over $750 they all ready had coupled of meetings on it. Makes us so mad pay tax and in the army. there is about 10 in this CO. that will have to day.

Les Low and Buck Ulmer joined the Marines he said the way he said they would only train 6 week. then they would be put on guard, at ship yard. that they won’t leave U.S. I to me that is the best part of the deal but I’ll bet they get awful fed up on guard duty all the time.

Yep you better be careful when you got to Ida now. or else Mrs. Ralis will chase you out. better tell Rich to buy his beer in Petersburg.

We are back at Fort Lewis I think I told you that before. I think we will be here for some time yet.

But Boy! they took one train after another of Soldiers out of here in the last two week but just as many come back in some that I new went to New Jersey, and a big bunch from there come out here.

That Dinner you had at home sounded pretty good.
I got a letter from Cecilia the other day.  She said she was always kinda looking for Ma.  I suppose when I get home I will be looking for her too.

I wrote Cecila last night right on her Birhtday it was good thing I thought of it at least right on the day.

Rich what the heck are you going to do without Ollie if he has to go to the Army? ha, ha.

I am sorta glad I had to go to the Army when I did I would hate to be going throu what I went throu if would be a lot worse now that we are in war.

It seems that we don’t worry about the fighting at all. and we don’t no half as much what is going on.  I’ll bet you no more about this war office than we do.

Well I just got off of 2 hr of guard now I will have 4 hr off will go on at midnight again. for two more hr. and so fourth until tomorrow 5 PM

Well I will go to bed and get a little sleep. My cold got little worse sitting out there. its kinda damp out tonight.