Ida said to unlock the door and let me in

Its been quite a while since I wrote to you so I’ll sit down and get it over with.

This is Mon nite just had supper and it wasn’t anything to brag about. It was pretty warm here today also Sat and Sun. It was real nice over the week end the first week and that it didn’t rain on one or the other day. 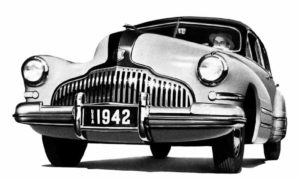 Seattle. Another fellow walked with me to the highway then he took a Bus to Portland he lives near there. It was sorta early so I thought instead of waiting for a bus I would try and hitchhike. I waited about 10 minutes and got a ride in a New 1942 Buick to Tacoma then I got another ride right to the heart of Seattle beat the bus by a long shot and didn’t cost me a penny.

Well when I got there I looked up Ida and Helen Hultz, I got there about 4:30 and no body was home. You know they live in an apartment so I went to the landlords rooms and asked him if he know where they were he said he didn’t know but he did see Helen take her mother to work in the morning.

Ed. Note: Helen and Ida are relatives from the Toledo side of the family?

They were real nice to me when I told him who I was and where I was from so right away he asked me to come in and he would call up where Ida works. So he did and got her right away. He told her I was there and asked what he should do. Ida said to unlock the door and let me in that she would be home about 6:00 it was about 4:45 then. So I went in turned on the radio took off my coat and make my self at home reading a paper.  Well about 10 past 5:00 the door opened and some one come in I felt kinda funny sitting there in the first place. Then this had to happen. Well it was Helen of coarse she didn’t know me she almost got afraid finally I got to my feet and told her who I was. She was so nice to me.

Helen has a 1937 Chevrolet car. So we went to a store to get some thing for supper and some Beer. Helen got pork chops and [this] good stuff. When we got back she put the stuff on the stove. Then she had to go get her mother at 6:00 so she made me watch the food so it wont burn, she was only going to be gone about 10 minutes, but that seemed like a hour. To me every thing turned out ok but the Pork chops nearly burned a [unreadable]

Well we had supper then Helen took me for a long ride in and around Seattle. I saw lots of nice things they both keep calling me Ben. All the time they talked about you so much. They were so surprised to hear Mother died they remember the nice dinner mother fixed for them the chicken they said it was so much better then over to Frank and Zola. They don’t like Zola very well. Ida was telling me about the time she got drunk on that  wine, I guess they both had such a good time at the party.

Oh! Yes Helen said I should ask you if you still picked pickles or weather you called them cucumber. I guess you two had words about that when they were out.

Also they talked about Hickory Park and so many things Ida asked about so many of her old boy friends such as [Fellis] Floyd. Ben Darrow as […. unreadable…]

They were going on some picnic,  so I left there about 1:30 and went to the swing shift dance. It starts at 1:00 to 5:00 in the morning there sure was a big crowd there. I sure was tired.

Oh another thing Helen couldn’t get over you having so many kids and you have your teeth pulled. Ha! She said that was about enough kids.

Well I better close too many fellows bothering me.