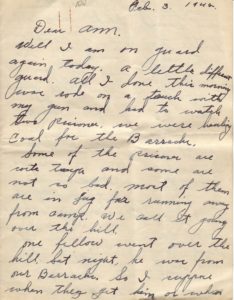 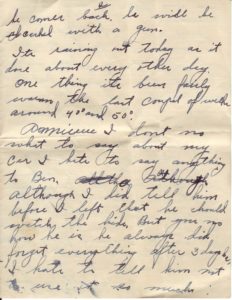 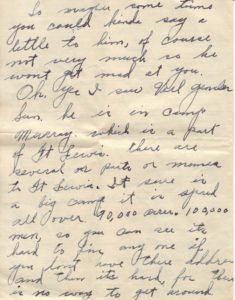 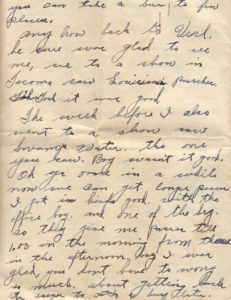 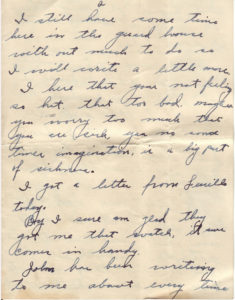 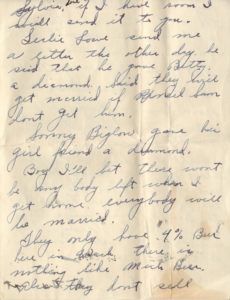 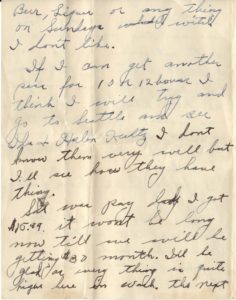 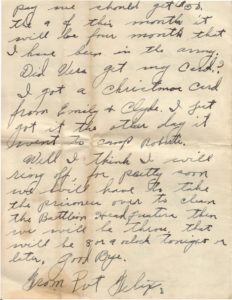 Dear Ann,
Well I am on guard again today. A little different guard all I done this morning was rode on a truck with my gun and had to watch two prisoners. We were hauling coal for the barracks. Some of the prisoners are sorta tough and some are not so bad. Most of them are in jug for running away from camp. We call it going over the hill.

One fellow went over the hill Saturday nite, he was from our barracks. So I suppose when they get him or when he comes back he will be checked with a gun.

Its raining out today as it does about every other day. One thing its been fairly warm the last couple of weeks around 40 and 50 degrees.

Annieeue I don’t no what to say about my car I hate to say anything to Ben all tho although although I did tell him before I left that he should he should watch the kids. But you no how he is he always did forget everything after three days hah. I hate to tell him not to use it so much. So maybe some time you could kinda say a little to him, of coarse, not very much so he won’t get mad at you.

Oh, yes, Verl Gensler he is in camp Murray which is a part of Fort Lewis. There are several or parts or mem…. to Ft. Lewis. It sure is a big camp.  it is spread all over 90,000 acres. 100,000 men so you can see its hard to find anyone if you don’t have there address and then its hard for there is no way to get around. You can take a bus few places.

Anyhow back to Verl he sure was glad to see me. We [went] to a show in Tacoma saw Louisiana Purchase gosh it was good.  The week before I also went to a show saw Swamp’s Water, the one you saw. Boy wasn’t it good.

Oh yes once in awhile we can get longer passes I got in kinda good with the office boy and one of the Srg. so they give me passes till 1 o’clock in the morning from three in the afternoon, boy I was glad you don’t have to worry so much about getting back its easier to catch a bus later.

I still have some time here in the guard house without much to do so I will write a little more.

I here your not feeling so hot. Thats too bad. Maybe you worry too much that you are sick. You no sometimes imagination is a big part of sickness.

I got a letter from Lucille today.

Boy I sure am glad they got me that watch. It sure comes in handy.
John has been writing to me about everytime Sylvia dose. If I have room I will send it to you.

Leslie Lowe send me a letter the other day. He said he gave Betty a diamond.  Said they will get married if Uncle Sam don’t get him. Sonny Biglow gave his girlfriend a diamond. Boy I’ll bet there won’t be any body left when I get home everybody will be married.

They only have 4 percent beer here in Washington there is nothing like Mich beer Also they don’t sell Beer Liquor or anything on Sundays. Which I don’t like

An aside from Caitlin: Initially I assumed Uncle Felix’s longing for Michigan beer was only homesickness. But a blogpost from detroitnews.com describes a thriving local brewing scene. Living an 50 miles south of Detroit, Felix would have enjoyed a variety of  european immigrant made beer:

If I can get another pass for 10 or 12 hours I think I will try to go Seattle and see Ida and Helen Huletz . I don’t know them very well but I’ll see how they have thing.

Sat. was pay day and I got $15.99 it won’t be long now till we will be getting $30 a month. I’ll be glad as everything is quite higher here in Wash. The next pay we should get $30 the 9th of this month it will be four months that I have been in the army.

Did Vera get my card?

I got a Christmas card from Emily and Clyde. I just got it the other day it went Camp Roberts.

Well I think I will ring off, for pretty soon we will have to take the prisoners over to clean the Battalion Headquarters then we will be throu that will be 8 or 9 o’clock tonight or later. good bye
From Pvt Felix